For any country to be ‘Healthy’, the primary objective which needs to be looked into is Nutrition which people get through various foods available in the country. India is a nation with bountiful harvest yet a lot of scope to spread awareness about malnutrition and anemia. I am glad that through the SuPoshan Project we are addressing these issues by reaching far off locations in the country. Fortune SuPoshan Project aims in touching the life of every Indian and enabling them to live life fully, thereby making India stronger, healthier and more productive.

The right nutrition during the first 1000 days in a child’s life, the pre-natal and post-natal periods, have great impact on a child’s ability to grow, learn and succeed. This crucial phase shapes the emotional and cognitive well-being as the child becomes an adult.

While dreaming for a healthy growing nation no attempt is too small and no effort is too big.

Adani Wilmar Limited (AWL) is a joint venture incorporated in January 1999 between Adani Group- the leaders in private infrastructure and Wilmar International Limited - Singapore, Asia's leading Agri business group. It is one of the fastest growing food FMCG companies in India. The Company has the largest range of edible oils spanning across the categories of Soya, Sun, Mustard, Rice bran, Groundnut, Cottonseed and the revolutionary Vivo oil. The company has extended its basket of offering with the introduction of soap – Alife. Besides oil, AWL has also forayed into packed Basmati Rice, Pulses, Soya Chunks, Besan and Wheat Flour. The product portfolio of Adani Wilmar spans under various brands along with their flagship brand – Fortune. Adani Wilmar Limited also caters to institutional demand through its industry essential range which includes bulk packs of consumer essentials as well as Lauric & Bakery fats, Castor Oil derivatives, Oleo chemicals and Soya value added products.

Adani Foundation was established in 1996 by the Adani Group as its CSR arm.

The primary approach of Adani Foundation has been an inclusive and sustainable growth of the communities.

During the year, Adani Foundation brought change in the lives of 2.3 million beneficiaries through its various initiatives spread across 15 states of India. 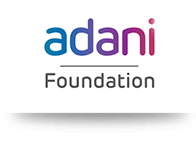 For any country to be 'healthy', the primary objective which needs to be looked into is nutrition which people get through various foods available in the country. At Adani Wilmar Limited (AWL), we have decided that by keeping a larger objective in mind i.e. 'For a Healthy Growing Nation', we look forward to touching the lives of every Indian and enabling to live life fully, thereby making India stronger, healthier and more productive. AWL has associated with Adani Foundation to successfully implement the Project SuPoshan, the quest against malnutrition and anaemia among the target groups which include children from 0-5 years age group, adolescent girls and women in reproductive age at various locations in the country as a part of 'Corporate Social Responsibility' initiatives.